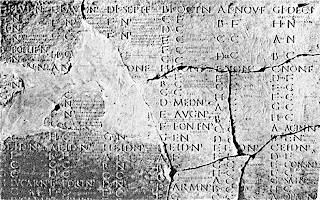 The oldest Roman calendar was only ten months long and 304 days long. According to legend, its creator was Romulus himself, the founder of Rome, in the year 753 BC. The year began in the spring, when the agricultural year typically kicked off, and ended at the onset of winter, when fieldwork drew to a close. The winter season was not named, nor was it counted. The first month of the year was Martius (our March), and was named after the god of war and protector of agricultural works, Mars. The second month, Aprilis, was named after the word aperire (opening), because the buds of the trees begin to open this month. The third was Maius (May), named after the beauty goddess Maia. The fourth month was named Iunius (June) after the queen of all goddesses Juno, whose blessings were believed to be necessary for a bountiful harvest. The following months were simply named after ordinal numbers, such as Quintilis (fifth), Sxitilis (sixth), and so on.

This clearly imperfect calendar was claimed to have been reformed in the 7th century BC by Numa Pompilius (* 753 BC - † 673 BC), the legendary second Roman king. The year was extended by 51 days, to a total of 355 days, with its existing months of thirty days shortened by one day, with these six days added to the two newly-inserted months. It was Ianuarius (our January), which was named after the god of two faces, Janus. The second month added was Februarius (February), named after the god of the underground realm Februus. Contrary to the current calendar, both of these months were added to the end of the Roman year.

In order to keep the beginning of the year and the individual holidays at the same time of the year, a leap month was inserted. However, because the Romans of the time were quite ignorant of astronomy, this leap month (called mensis intercalaris or intercalaris), was inserted on an as-needed basis, not through any specific calculations, and simply appended to the end of the problematic year. It was not until the mid-5th century BC that a better system of inserting the leap month was created. The change caused the leap month to be inserted every two years and alternated between 22 and 23 days. So, for the first the four-year period, the first year had 355 days, the second saw 378 days (355 + 23), the third was back to 355 days, and finally the fourth year had 377 days (355 + 22). This four-year period therefore had a total of 1465 days, making the average length of the year 366.25 days, thus causing the calendar to be one day longer than a solar year. With the publication of the Law of Acilius (Lex Acilia) in 191 BC, the cycle of alternating normal and leap years ceased to apply. The amendment then depended on the decision of the pontiffs or the senate, whose decisions were entirely arbitrary, and as a result the calendar soon became nonsensical and confused. This law also changed the beginning of the Roman official year, (i.e. the day when Roman consuls took office), so starting in 190 BC, the first day of the official year was January 1. As the official year gained more importance as a way of measuring time, the beginning of the civic year withdrew from the 1st of March and became the 1st of January.