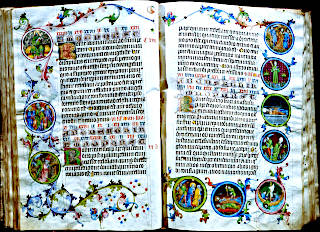 The martyrology was originally designed as a calendar that listed all of the recognized saints in Roman Catholicism. It is filled with the dates of their deaths (these are considered the dates of spiritual rebirth for saints), along with a brief record of each of their lives. Many of these dates originate from the period of heavy-handed persecutions the Roman Empire directed towards the early Christian community, and are corroborated by the legal documents of the time. The oldest known martyrology was that done by Breviarium Syriacum in 411, but it should be noted that this was merely a Syriac translation of the lost Greek martyrology of Antioch written in 370. In 735, another martyrology was written by Beda the Venerable, then in the second half of the 9th century, a French Benedictine monk by the name of Usuard (Latin: Usuardus), contributed his own significant martyrology. Meanwhile, Orthodox churches have been busy with their own “martyrology” over the years, but they call their collection of saints by a different name: a menologium.

Over the centuries, the number of saints gradually increased, with more and more being introduced each day. In 1582, after Pope Gregory XIII’s Council of Trent, the official Roman martyrology (Martyrologium Romanum) was issued, having drawn most of its conclusions from Usuard's martyrology. Unfortunately, it contained a number of errors that forced the church to withdraw it from use until a later edition in 1584 was able to provide a more authoritative list. Over time, the number of saints continued to grow, so that by the beginning of the 20th century, the Martyrologium Romanum contained over 13,000 names. After the Second Vatican Council, the number of names in martyrology was culled, with only saints of demonstrably pious virtue left remaining; the latest version of Martyrologium Romanum issued in 2004 runs 844 pages long and contains the names of 6,658 saints and blessed persons. This averages out to about 18 saints commemorated every day. 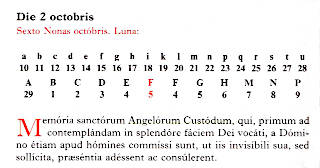 Among other things, martyrologies sometimes included an aid to assist in determining the phase of the Moon, such as what’s found in the martyrology letters (Litterae Martyrologii). However, these were not particularly accurate astronomical calculations, as they used ”cyclic calculations” that sacrificed accuracy for the sake of simplicity. In the Julian calendar, the first nineteen letters of the alphabet (A-T) were used to represent the Golden Number, and above each of these letters were numbers that showed how many days were in the selected month. Each of these were done according to their position in the nineteen-year cycle’s golden number, so it was enough to know the Golden Number for the Year, and from this point, you should be able to find the phase of the Moon for any given day. Following the introduction of the Gregorian calendar, cyclical calculations became more complicated and this tool had to be modified. The papal bull Inter gravissimas (“among the most serious”) also mentions this:

Moreover, so that the fourteenth day of the Paschal moon is given with precision and that the age of the moon is presented with precision to the faithful in accordance with the antique use of the Church, to take note of it each day with the reading of martyrology, we order that once the Golden Number is withdrawn from the calendar, one substitutes the cycle of the epacts for it which, thanks to its very precise rules mentioned above for the Golden Number, makes so that the new moon and the fourteenth day of the Paschal moon always hold their place. And this is seen clearly in the explanation of our calendar, where are also presented Paschal tables in conformity with the ancient habits of the Church and which make it possible to find more surely and more easily the sacred date of the Easter.

The letters were then set at 30 (A through P, with some letters omitted for clarity), which represented the thirty epacts, including the special 25th epact, which was a double letter F.