The most widely used calendar the world over is the Gregorian calendar. This calendar is itself an improved version of the much older Julian calendar, but without the calculation errors that made the predecessor unreliable as a permanent solution. For practicing Christians, Easter was the most important holiday, but because it was a moving holiday, it wasn’t always easy to predict. In order to lay out a calendar with this date clearly marked, they had to know a number of things, the first of which being when exactly spring began. The church traditionally set the start of spring as the 21st of March, but from there one also needed to know when the first full moon of spring would occur. This date was often obtained through the usage of “cyclic calculations,” but these were not as precise as astronomical calculations. The people who laid the groundwork performing these original calculations were generally scholars, and they were known as “chronologists”. Dating back to the year 325, when the First Council of Nicaea laid down the rules for calculating the date of Easter, several centuries passed and discrepancies began to crop up. Differences between the predicted and actual phases of the moon began to grow further and further apart, while the vernal equinox also began to drift away slowly from the original date of 21 March. This was observed in the 8th century by the chronologist Beda the Venerable, and by the 13th century, the mistake had even become obvious to the laity. In 1344, Pope Clement VI commissioned mathematicians from the Sorbonne to prepare a correction to the calendar, but died before ever seeing the matter resolved. His successor, Pope Innocent VI, did not see how this was important, and put no support behind his predecessor’s project. As the magnitude of the error increased, the pressure to correct it slowly began to increase. Civil calendars began to give alternative, and accurate, astronomical dates. Two centuries later, Jan Muller of Královec had produced a calendar that pointed out thirty errors in the church’s Easter calculations. This prompted Pope Sixtus IV to commission him to draft a calendar reform, but unfortunately, Jan Muller died before the work was ever completed. 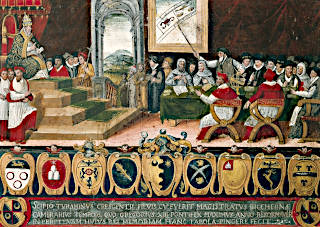 In the first half of the 16th century, the mistake had become so unbearable that Pope Leo X called upon the leading scholars of the time (e.g. Nicolaus Copernicus) to submit new proposals for reform. Soon after, between the years of 1545 and 1563, the church held its nineteenth ecumenical council. Ecumenical councils are rare, with only 21 in existence, and their stated purpose is to bring together experts in order to settle church matters. At what is now known as The Council of Trent, the church’s experts still could not come to an agreement as to how to correct the calendar. However, not long after the council, Pope Gregory XIII began to champion a proposal laid out be the Italian astronomers Antonio and Aloysius Lilius (original surname Giglio) and the mathematician Christoph Clavius (* 1538 - † 1612). On 24 February 1582, Pope Gregory XIII signed the papal bull inter gravissimas, which contained the text of the reform, and made its adoption official.

The first goal of the new reform was to return the day of the vernal equinox back to March 21, as originally set by the Council of Nicaea in 325. To remedy this, ten days were removed from the calendar (see the calendar for 1582). These dates were chosen in such a way that they would affect as few church holidays as possible, and also, avoid disrupting the liturgical year. They also wanted to maintain the regular order of the seven days of the week, which eventually led them to omit everything between Thursday, the 4th of October 4 and Friday, the 15th of October. After these days were removed, the rules for determining leap years were then adjusted to prevent significant shifts in the vernal equinox from occurring in the future.

Then, lest the equinox recede from XII calends April [March 21st] in the future, we establish that a bissextile [intercalation day] shall be inserted every four years (as with the present custom), except in centennial years. Those, although they were always bissextile until now, will not be from now on, although we decree that year 1600 is still bissextile; after that, however, those centennial years that follow are not all bissextile, but the first year is, and then three centennial years have no bissextile [intercallation] performed, and, then, the fourth centennial year is indeed bissextile. Thus, the years 1700, 1800 and 1900 will not be bissextile, and then, as with the habit with which we are now accustomed, the year 2000 will have a bissextile intercalation day, as the day February 29, and that the same order of intermittent bissextile intercalations in each four hundred year period will be preserved in perpetuity.

The second goal of the correction was to provide a more accurate method of calculating the first full moon after 21 March. Before doing this though, it was necessary to compare this prediction against the reality of the situation. Up to this point in time, the Golden numbers listed in the “eternal” Julian calendar were deemed sufficient enough, with the epacts simply used to identify other data useful in the calculation of Easter. However, with the Gregorian calendar, the epacts played an even more important role. They were now being used to find the calendar date of the full moon and thus came to represent the Golden number itself. This Golden number was then applied in the creation of the new calendar, but only as a way to calculate the epacts. These new Lilian (Gregorian) epacts were among the most debated parts of the reform.

Moreover, so that the fourteenth day of the Paschal moon is given with precision and that the age of the moon is presented with precision to the faithful in accordance with the antique use of the Church, to take note of it each day with the reading of martyrology, we order that once the Golden Number is withdrawn from the calendar, one substitutes the cycle of the epacts for it which, thanks to its very precise rules mentioned above for the Golden Number, makes so that the new moon and the fourteenth day of the Paschal moon always hold their place. And this is seen clearly in the explanation of our calendar, where are also presented Paschal tables in conformity with the ancient habits of the Church and which make it possible to find more surely and more easily the sacred date of the Easter. 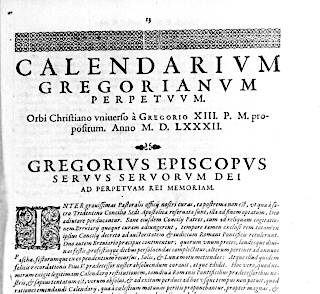 Photographs of the papal bull transcript
from the book "Opera Mathematica" by Ch. Clavius

The reform had many critics, especially among Protestants, many of whom simply objected to it having been proclaimed by a Catholic Pope. The pope himself was to be labeled by his detractors as an "antichrist who wants to change time". Joseph Justus Scaliger (* 1540 - † 1609) stood out among the critics, and wrote his arguments against the new calendar in the work Opus novum emendatione temporum, as he was bothered by the staggering complexity of the chronological calculations. The astronomy professor Michael Mästlin (* 1550 - † 1631) also criticised the cyclic counting of the phases of the moon, under the pretense that the calendar was not astronomically correct. Christopher Clavius, the German astronomer who assisted Pope Gregory XIII in implementing the new calendar, would ​​respond to Mästlin’s objection in 1588 by asserting that the astronomical tables could no longer be used, as they were imperfect. In 1595, Clavius would ​​also respond to Scaliger's more lengthy objections. The new calendar also saw its share of protestant advocates, such as Tycho Brahe (* 1546 - † 1601), the most important astronomer of the time, and his former assistant Johannes Kepler (* 1571 - † 1630), who formally advocated its usage as the imperial mathematician of the Holy Roman Emperor Rudolf II.