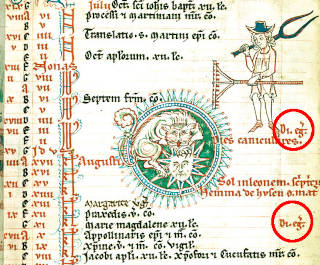 In older medieval calendars we may come across the abbreviations D, Dies or Di.Eg. These are the Dies egyptiaci, egyptiacus, aeger, mali. It was considered a sign of the “unfortunate days”, when it wasn’t appropriate to work, trade, or travel. Sometimes a piece of verse was written in the calendar as a warning for these days, while in other calendars, the authors went so far as to list the “unfortunate hour” of the day. Naturally, this was all just superstition, as the method of determining an unfortunate day is still unknown. Also, the origin of the name itself isn’t entirely clear. It’s possible that the calculation came from Egyptian astrologers, and sometimes one can even find people asserting that the origin dates back to the ten plagues of Egypt. There were several variants of the way unfortunate days were distributed throughout the year, and they changed over time. The first unfortunate days were only three times a year, while in later calendars, their number ballooned to twice a month, or 24 a year. In exceptional cases, it even exceeded 24. The following is an example layout for the two unfortunate day a month schema, with all the numbers on the table showing the days of the month that their corresponding unfortunate days occurred:

As far back as the early Middle Ages, the church had been fighting this superstition, meeting with varying degrees of success. Sometimes, unfortunate days even managed to creep into the calendars of official church institutions. This superstition would persist for a long time, refusing to disappear completely, lingering on all the way up to the 19th century.