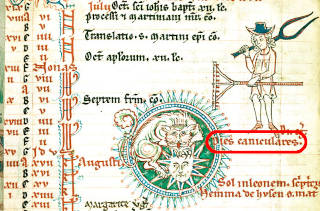 The ancient Greeks and Romans noticed the temperature was at its peak during the months of July and August, and coincidentally, this period of time also saw the beginning of the heliacal rising of Sirius. In plain English, this simply means that this is the time of year when the brightest star in the night sky (Sirius) starts to make an appearance in the morning twilight just before sunrise. Sirius, which takes its name from the Greek word “scorching” (think “searing heat”), is part of the Canis Major constellation, and because of this, the ancient Romans used the term dies caniculares, canicularum, caninus (literally “dog days”) as a way to refer to this extra warm time of the year. On these hot days, work and trading stopped, and there was a period of calm, with the period of greatest summer heat occurring between 23 July and 23 August.

This naming convention was adopted by some medieval calendars. The beginning was called Incipiunt dies caniculares and the end Finiunt dies caniculares. The actual dates of the period varied depending on the local climate, but for the most part, it often corresponded to the following periods:

Over time, dies caniculares underwent semantic widening. The word began to take on a broader meaning, simply becoming synonymous with the warmest time of the year and the accompanying leisure time. In Russian, these days are still known as cannulas. It should also be noted that even in the medieval calendars, the term was somewhat anachronistic, as the heliacal rising of Sirius had drifted out to September due to the earth’s axis of rotation.