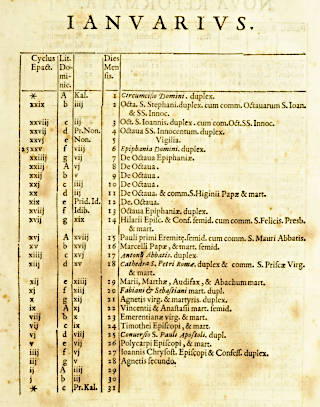 This table shows a medieval chronological aid, published in the book Explicatio, under the title of “CALENDARIUM GREGORIANUM”. The values of the epacts (which reflect the phases of the moon) are progressively written throughout the year, with an epact of 0 written for the 1st of January (technically, the concept of “zero” was not yet widespread during the Middle Ages, so the character * was used instead). On the very next day of 2 January, the epact 29 was written, followed by epact 28 on the day after that, and so on in this order. Since all the phases of the moon alternate in a cycle of approximately 29.5 days, the epacts (which were designed to correspond to moon phases) were likewise recorded in an alternating fashion, with their durations being either 30 or 29 days long. In this way, all 30 epacts span the 1st of January to the 30th of January, followed by a new cycle from the 31st of January to the 28th of February (i.e. for only 29 days). Epacts of 30 days are also inserted into the cycle where the 25th epact needed to go between where the epacts 26 and 24 actually exist. Thus, they were to take on this alternating pattern until the end of the year. Below you can see that the second column in the table is listed as let.day. These are the "letters of the day" (Latin: literae calendarum).

Take particular note of how the calendar dates from 8 March to 5 April are highlighted. On these days there must be a new moon, after which the first ecclesiastical full moon must occur within the next 13 days. Because of this, the ecclesiastical full moon can occur no earlier than on the 21st of March, or on the 18th of April at the latest. This makes for an important detail in the calculation of Easter Sunday.

An exceptionally rare situation occurs if a given year has a Golden Number of 19 and a Gregorian epact of 19 at the same time. For these years, we find a new moon for epact 19 on the 2nd of December. Since the nineteen-year long cycle of the Golden Number ends, we need to add the number 12 (Latin: saltus lunae) to this epact, in order to make the epact for the next year work itself out as 1. For this epact, the new moon is not until 30 January - in effect, one new moon fell off! To remedy this anomaly, another new moon is to be inserted on 31 December for epact 19. The last time this happened was in 1690, and it won’t happen again until 8511.

If necessary, on this table an epact with an earlier date of the cyclic full moon (i.e. a Golden Number greater than 11) will be written in (such as 25).